INSIDE THE SCARY MIND OF NICOLAS CAESAR : An Exclusive Interview As a Rat Toothpaste blog exclusive , Today I had the honor of interviewing the living legend ; Nicolas Caesar. Below is the in depth and very personal interview you will not read anywhere else. To date Nicolas has had over 250 group shows ! , 15 solo shows and has curated 18 shows and exhibits. His contribution to art , especially dark art is astounding.
If their is such thing as a "King of Macabre" in the 21st century ,
Nicolas is he and he rules his kingdom with an iron fist ! Keep reading. 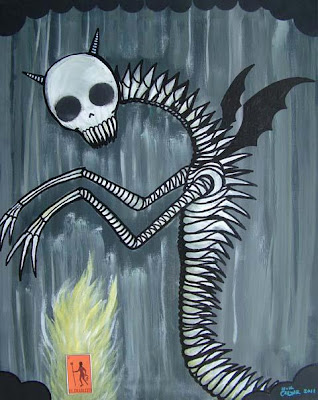 Q: Nicolas , can you tell everyone what your first art show was like ? How old you were ? Where was it at ? And what kind of art you displayed ?

A: My first art show was with Poz Energy in Downtown San Jose. It was a homeless hippy show with a lot of line drawings, colored lights, curtains, and doodles taped to the walls. I had my first installation of sculptures there and was really excited. I don't think people were there to buy art but to take acid, get high and have a cool environment. At that time I didn't know anything about selling art so I just had a few beers and took it all in. That was 1994 so I think I was 21 or just turned 21. 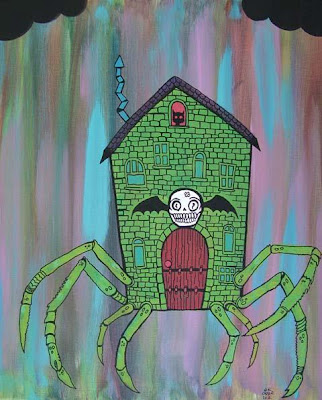 Q: You currently have several projects in the works including the curation of a horror anthology. Anything you are particularly excited about ?

A: I'm really excited about Filthy Cake, the horror anthology. I have a great mix of artists and writers I've known through the years and this is sort of our jam session. I took the model of Tales from the Crypt and other EC comics and gave everyone the freedom to put their spin on horror stories. What's coming out is a great mix of styles and ideas. I was inspired heavily from working on Mike Schneider's Alice in Wonderland "What use is a book without words" project where umpteen artists go chapter by chapter of Alice in Wonderland using nothing but symbols and illustrations. Throughout my many art adventures I meet a lot of talent and I'm not one of those types to wait for something to happen - I get an idea and role with it. Eric Tolles and I do "wordplaythursday" and Danson with Wolves together, George Ford is a web comic artist I met in Anaheim at Wondercon, Taco Comics and I have been pals since Weekend of Horrors in Burbank, Cinder, Jared Konopitski, and John Hageman and I have been longtime friends who show regularly together, Jose Angel Gabrielle was my neighbor at Wondercon SF, Matt Deterior and I thought of the project and we also do Save The Bedbugs together, Michael Adam and I both worked for Joedon Comics, Mike Hates Meathook is another from Save the Bedbugs, Axel Howerton and Red Tash I met through the Coffin Hop Web tour, Jay Cee and I do Two Buck Tuesday at Kaleid every 3rd Wednesday, and there are so many more! Including an amazing surreal artist named Justin Aerni! People just need to buy it for the brain candy! 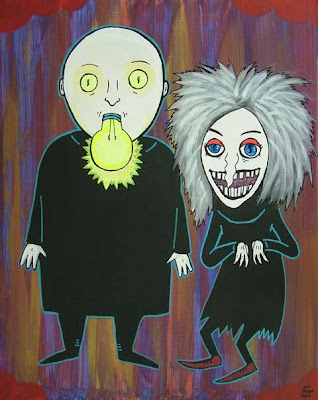 Q: Let's talk family for a sec. Are you married ? Any kids that we don't know about ? Is there anything you would like to say about them ?

A: I'm married to a beautiful woman named Sarah Karas. We watch crappy horror movies together and go to Flea Markets on the weekends. She's the one who photographs all my art. She's often as quiet as a church mouse but get a good poker game on and she'll tear anyone a new asshole. I love that woman of mine. No kids. Just a chihuahua named BooBoo. It's a cute dog that part of the time likes me. 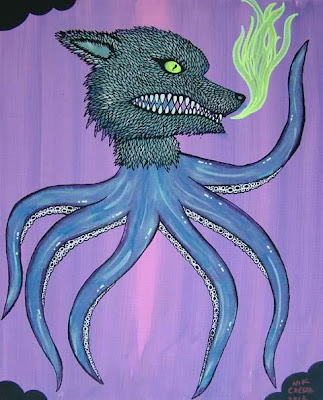 Q: Over the past several years I've noticed your work evolve. Visually it is more detail oriented and labor intensive. Tighter lines and over all more masterfully produced. How would you describe as an artist the feeling of becoming technically better and when do you realize that you have in the creation process ?

A: I think better tools make a difference. Before I was just using sponge brushes. Now sharpie released a great series of water based paint pens. My hands shake so I can't draw a strain line to save my life but with the pens I at least have more control. And to me art is a journal. The journey is the destination. Chet Zar said ; "You're only as good as your worst piece." I disagree and showcase pretty much all of my pieces on my site. I don't want any illusions about me. What you see, all of it, is me. This didn't happen overnight. I hammered out my art over years and years and I don't want to shun anyone who supported my art when I was starting. One of my collectors offered $1,000 to someone who bought a piece of mine for $40 at my first Alternative press expo. People like all parts of the evolution. I'm still learning. I think even at 80 I'll be learning. I'm happier now with my work than I was before but I stand behind every piece I made. Except cats. Cats are when I needed rent money quick. 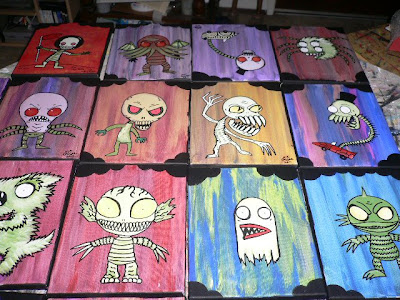 Q: What do you like most about being an artist in California in the 21st century ? Also if you could move anywhere , where would it be and why ?

A: I hate the hot weather here. I used to fantasize about living in Seattle where it rained all the time. I love the rain, I hate feeling like a sweaty WackyWallCrawler. After watching Lost in Translation I think I could live in a hotel in Japan forever, but California is my home. I lived in Oakland, San Francisco, and now Fremont. I even lived as far as Cleveland, after living in Parma, Ohio for a year - there's no place like home. I go where the freaks are and California definitely has a surplus. 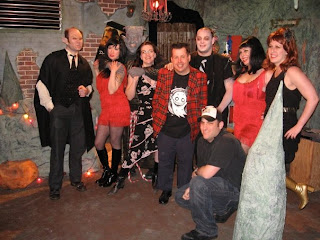 Q: We know that you draw some of your inspiration from horror movies. Are there any new horror movies that you would like to talk about ? Any that have inspired you lately ? If you were directing a horror movie what would you do differently than what's out there now ?

A: This is a loaded question because I'm a horror fanatic. Right now I'm really into creature features, Sharktopus, Two-Headed Shark Attack, Mega-Piranha, Sand Serpents, etc. I love horror movies that go more by entertainment than try to be clever. Cotton-candy horror. Flicks that are just fun. Sharks eating airplanes out of the sky. I would really love to remake Attack of the Beast Creatures, I love that stupid movie. It really has a great 50's sci-fi story with acid water, red Trilogy of Terror beasts attacking survivors on a stranded island. I would really like to mix that flick with the direction of Ishirô Honda, he did Attack of the Mushroom People. As far as theater films go the last film I was excited about was the prequel to The Thing. Which I enjoyed until the last half hour when it just went stupid. But mostly I dig around the direct to video bargain bin. 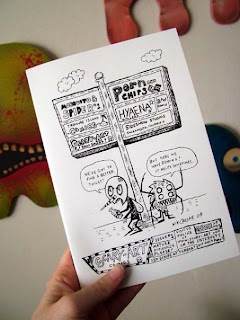 Q: You are the founder of the scary art collective. What is the future of that group , what would you like to have happen ?

A: It's definitely going to mutate soon. I think Filthy Cake is a test run of things to come. I have plans to expand it to a book, film, art, comic, company. I'd like it to become your one stop shopping for everything you need to own. I think the Scary-Art collective is doing now what the Sex Pistols did in the 70's - make something big out of absolutely nothing. The Sex Pistols were only 4 blokes and a manager. We have 53+ brains working for us. That's part of my reason to bring everyone together like an artistic Borg. 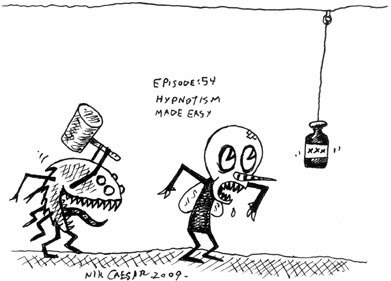 Q: Do you feel most inspired by personal tragedy in your life or when everything is "right" in your world ?

A: I've been hit with tragedy after tragedy. It becomes a part of you. I've had a fucked up life, when you lose everything again and again. Heartbreaking to pieces. Penniless. Losing people to cancer, loosing them to suicide. Rene Cigler was my idol and she passed on August 4 2008. I still don't know why. Our own mortality ticking away, knowing everything I am will cease to exist at some point. Anything I leave behind will be destroyed at one point. There's a grizzled old sailor in me drinking to the end of the world and there's a spider trying to hold everything together. Art serves as great therapy. Each painting is a slab of madness. 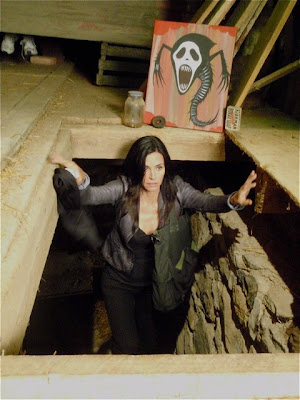 Q: What is it about your characters ; "Mosquito" and "Spider" that draws people in ? What do you think people like most about the comic ?

A: I think everyone loves the terrible drunk they don't have to live with. From Shut Up Little Man to The Young Ones to WC Fields there's that effigy of self destruction we vicariously live through. We all want to be the anarchists, the chaos bringers, the fuck shit uppers but we also don't want to be stabbed. lol 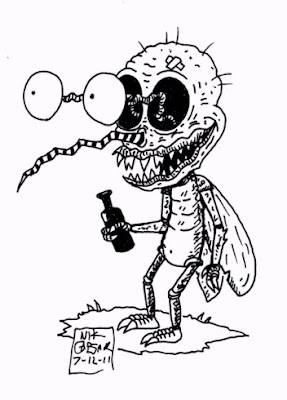 Q: What are some of your favorite monsters , characters or reoccurring themes that you like to paint ? Do you relate to these monsters and characters that you paint on a personal level ?

A: The Creature from the Black Lagoon and Medusa. Ever since Clash of the Titans I loved Medusa. I'm kinda attracted to fish/reptile hybrids. I love the old sea monsters you find in maps. The reoccurring themes are anger and happiness or both. Sometimes the end of the world. They're all me. They're the masks we wear in front of different people. Before you let down your guard and show the real you there's the mask you wear to your parents, your friends, your collectors, strangers, always that smiling mask testing the boundaries. 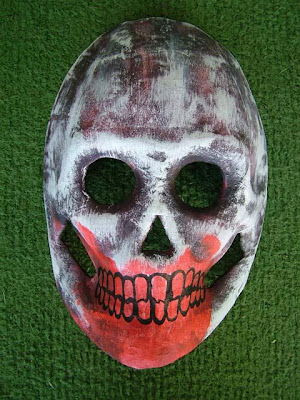 Q: Has a piece of art ever made you cry ? or any particular painting that has changed your life ?

A: I have a little tin box I bought off of eBay by Rene Cigler. I keep ornaments from all the people in my life that have died inside. Not tears really but absence, loss. I think Gerald Scarfe's work in Pink Floyd's The Wall. I. Braineater's art on Skinny Puppy's Too Dark Park album got me back into painting. 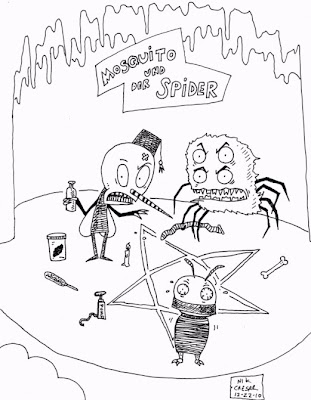 Q: If money was not an issue , what would you like to do "art wise" before you die ?

A: I think I would have blimps with Scary-art.com banners circling around the world. I would give every underdog, outsider artist ads in People Magazine and Rolling Stone. I would place late night ads for the site on TV. Until then I'll keep taking the piss out of the art world like I always have. 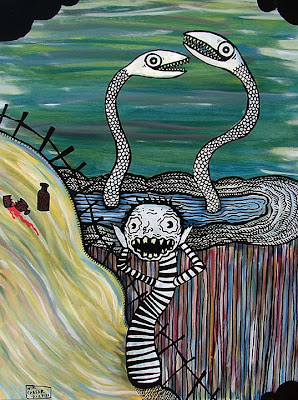 Q: Nicolas what makes a great artist in your opinion ?

A: Someone who's down to Earth in this ego heavy occupation. I think too many are trying to be artificial Van Gogh's and Picasso's rather than themselves. A great artist should fight the fight, the long fight, against hecklers, critics, and prejudice. They should be self strong and determined. They should be friendly. 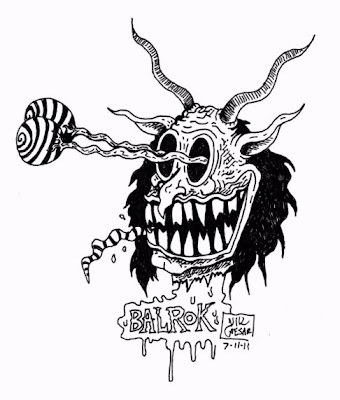 A: I made art accessible to the poor and middle-class. I outsold the heavyweights in numbers of originals. I've done more as an outsider artist all by doing something nice for someone else. I'm not a shark, I'm a virus. 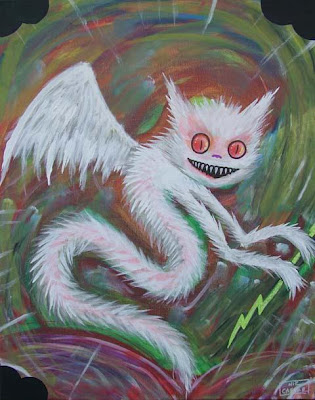 Q: And finally are there any blogs or website's that people should know about ?